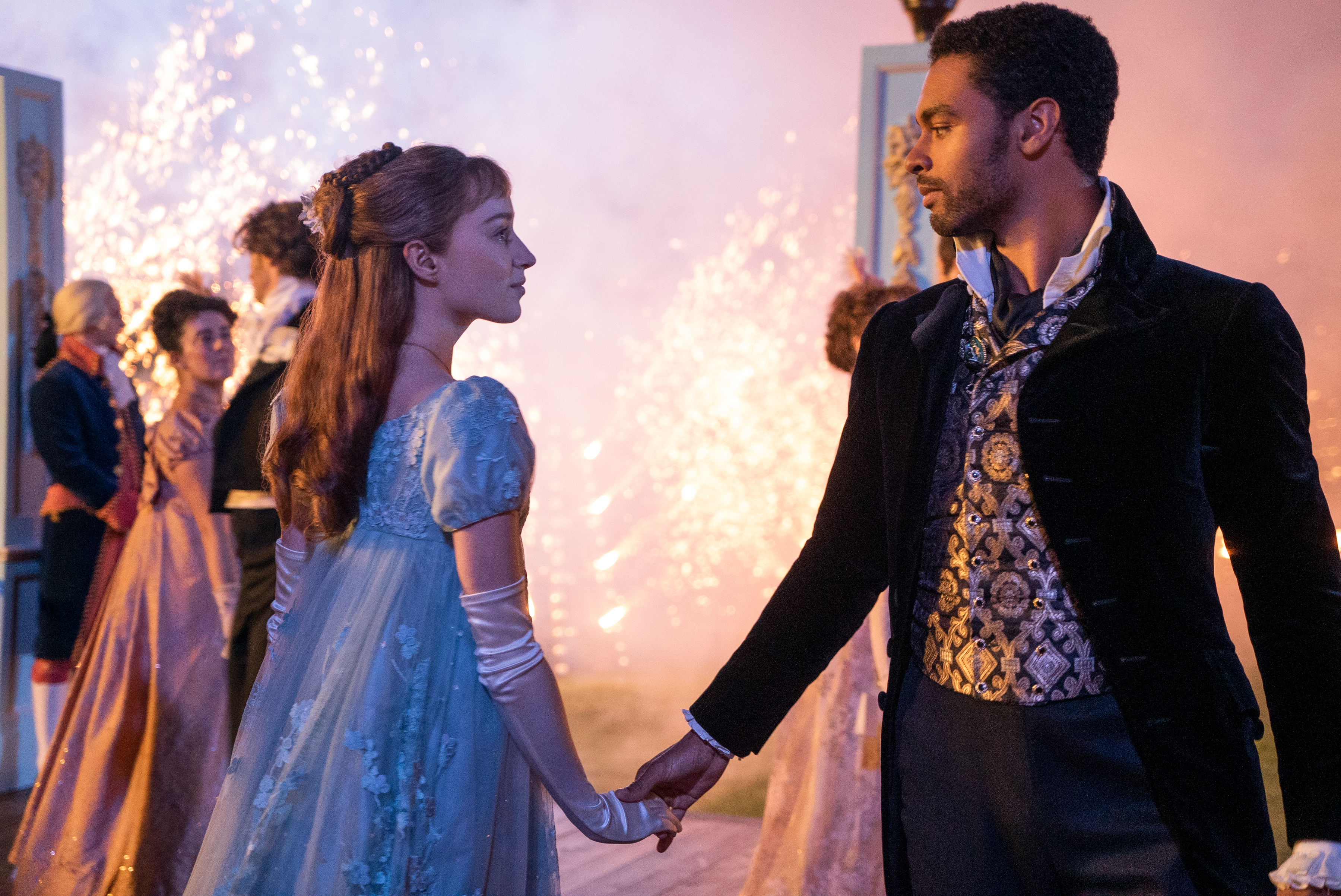 Costume designer Ellen Mirojnick reunited with executive producer Shonda Rimes for the innovative regency romance — and as the 63 million-plus households already watching Season 1 can attest, the show’s clothes are truly the “diamond of the season.”

“My main objective was to create a world that was aspirational, that I could take regency and twist it enough and be able to add modern elements,” Mirojnick told Page Six Style.  Not intended as “a history lesson,” her costume choices instead created “a new feeling for 1813 that absolutely fit with the modern twists and turns of the show.”

And while fictional gossip columnist Lady Whistledown has the scoop on court scandal, Mirojnick is the reigning expert when it comes to the show’s warehouse full of 7,500 costume pieces, all assembled by her team in the five months prior to filming.

“We had to build everything from soup to nuts, from shoes to millinery, inside and out,” she explained, adding that she couldn’t possibly choose a favorite from the “visual feast” of the series’ 6,000 complete costumes.

Mirojnick shared her look book with the actors prior to filming, calling the process a “great collaboration.” Adjoa Andoh, for instance, was the one to suggest her character Lady Danbury’s top hat and walking stick.

Adjoa Andoah (in purple) had a “very strong feeling” about how her character Lady Danbury should dress.Netflix

Though many of the British actors were “used to doing regency in somewhat of a Jane Austen feel,” the clothes in “Bridgerton” are just as vibrant as the show’s colorful characters; there’s nary a beige dress or bonnet in sight. From the “audaciousness of the Featheringtons” to the Queen’s ever-changing silhouettes, the stars of the show all “flipped out and loved” their looks.

“When we make [costume] choices, we hope everyone kind of understands that we are visual storytellers,” the costume expert revealed, noting that heroine Daphne Bridgerton’s (Phoebe Dynevor) color palette changes throughout the show to reflect her fading innocence.

As for Daphne’s love interest, “Bridgerton’s” dreamy Duke of Hastings (Regé-Jean Page)? “Although he is so much of a rogue and so handsome … how he evolves is that he becomes a bit more sophisticated,” said Mirojnick.

“He still has his own style and his own independent point of view, but it [becomes] a little bit more married into the time that we are living in through the story.”

Regé-Jean Page as Simon Basset, the Duke of Hastings, in “Bridgerton.”Netflix

Since the show’s release, the Duke has skyrocketed to sex symbol status; a spoon he licked on the show even spawned its own Instagram account. Over the course of the season, his steamy scenes required the costume team to consider not only how the characters dress, but also how they undress.

“It’s a careful choreography that needs to be paid attention to. How does his shirt come off? Does she rip it off, or does it come off? Is it easy for his trousers to drop? Things along those lines,” explained Mirojnick, who looked to showrunner Chris Van Dusen’s script for cues.

“In the rain scene, we see her garment come off and that corset was specifically designed for that … there’s more color and there’s more detail in that particular corset than the one that she wears every day,” she continued.

However, as the costume expert pointed out, some of the show’s most stirring scenes also relied on more subtle “choreography.”

“What’s really, really lovely, where you really don’t see anything but you actually feel a lot, is when they’re together and all he does is lift her skirt … that is just sexy unto itself, without really seeing the undergarments.”

When creating the “half corsets” seen on many characters in the show, Mirojnick collaborated with iconic couturier Mr. Pearl, whose legendary designs have been worn by stars ranging from burlesque superstar Dita Von Teese to Kim Kardashian at the 2019 Met Gala.

“He created the shape of the corset that just hugged underneath the bosom … shaping the cups of the corsets and the shoulders so that the bosom was without a question accented in the most beautiful way,” Mirojnick gushed. “There’s nobody in the world like [Mr. Pearl], no one.”

To source the show’s many eye-catching baubles, Mirojnick collaborated with jewelry designer Lorenzo Mancianti, who was “constantly on a hunt” to create and find pieces that were “as real as [they] could be” from cities including Spain, London and Rome.

The flashy Featherington family wears plenty of color to court in “Bridgerton.”Netflix

While Mirojnick originally looked to “probably every decade from 1813 forward” for ideas, the show’s distinctive looks are now making their mark on 2021. In the weeks since the show’s release, “regencycore” corsets and dresses have reportedly begun trending.

“With the success, which is thrilling, we just don’t want it to look tired in two years,” Mirojnick explained, adding that she hopes audiences in 10 years will “dig it” the same way.

“It’s really more about the timelessness … it’s kind of like having the correct recipe for the best stew possible and want[ing] people to have a second helping.”

While Netflix has yet to officially confirm a second season of “Bridgerton,” it’s safe to say viewers are hungry for more.